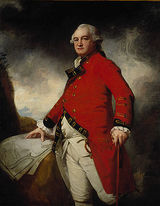 Description:
Major-General James Stuart (died 2 February 1793) was a British Army officer who served in various colonial wars of the 18th century. His service of the British East India Company was marked by his conflict with Lord Pigot, the governor of Madras; Stuart's arrest of the latter in 1776 resulted in his suspension as commander-in-chief, and he was not vindicated until 1780. He later fought in the Second Anglo-Mysore War, but was suspended from command in 1782 by Lord Macartney, an action that provoked a duel between the two men. Stuart was a younger brother of the lawyer and politician Andrew Stuart.

Stuart was appointed captain in the 56th Regiment of Foot on 1 November 1755. He first saw active service at the siege of Louisbourg (present-day Nova Scotia) under Lord Amherst in 1758. On 9 May of the same year he was promoted to the rank of major, and in 1761 was present with Colonel Morgan's regiment at the reduction of Belle Île. During the course of the expedition he acted as quartermaster-general, and in consequence obtained the rank of lieutenant-colonel.

From Belle Île he went to the West Indies, and served in the expedition against Martinique, which was captured in February 1762, and on the death of Colonel Morgan took command of the regiment. After the conquest of Martinique his regiment was ordered to join the expedition against Havana, where he greatly distinguished himself by his conduct in the assault of the castle of Morro, the capture of which...
Read More