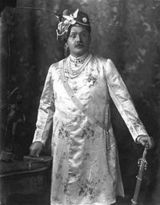 Description:
<!-- See WikiProject Indian cities for details -->Jamnagar () is a city and a municipal corporation in Jamnagar district in the Indian state of Gujarat. The city was built up substantially by Maharaja Kumar Shri Ranjitsinhji in the 1920s, when the district was known as Nawanagar. The district lies just to the south of the Gulf of Kutch and is 337&nbsp;km west of state capital, Gandhinagar. Jamnagar is famous since decades for its strategic location, as it has all branches of defense Indian Army,Navy and Air-force. Recently, Jamnagar has shot to prominence as Reliance Industries, India's largest private company, established the world's largest refinery near Moti Khavdi village of Jamangar. It is also home to Essar Oil, another important oil refinery of India, Essar Oil Refinery, Vadinar. Being home to single largest mineral oil refinery in world, Jamangar is known as Oil City of India.

Jamnagar, historically called Nawanagar or the new city, was one of the most important princely states of Saurashtra. The Jamnagar district, originally constituted as Halar district, is relatively of recent origin. However, the region comprised therein is of great...
Read More