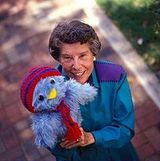 Description:
Jane Belk Moncure (born December 1926) is an American author of early childhood non-fiction, fiction and poetry. She has also written under the names Bruce Wannamaker and Jennie Davis.

Moncure has lived in Virginia and North Carolina. She worked in early childhood education for thirty-five years. She lives in Elon College, North Carolina.

Moncure is a creative and prolific author: there are millions of her books in circulation, and they are widely distributed in schools and libraries. Distribution has been primarily through The ChildsWorld, ChildrensPress and Scholastic. Her creations and works include My First Steps to Reading, My First Steps to Math, My First Steps to Science, Word Bird, The Soundbox Books, and The Magic Castle Series. Her works have been translated into British English, Spanish, French, Chinese, and Malay. Belk Library, Elon University holds a collection of all published books by Moncure.

Jane Belk Moncure is a recipient of the C.S. Lewis Award and over the past 20 years, her works were recognized by numerous Awards. Most recently, in 2008, Jane received the Scholastic Teacher's Choice Award for her outstanding contribution to the My First Steps to Learning Program.