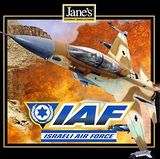 Description:
Jane's IAF: Israeli Air Force is a military jet aircraft Combat flight simulation video game released in 1998. This simulation was developed by the Israeli company "Pixel Multimedia" and was released under the Jane's Combat Simulators line from Electronic Arts.

The game which is set in the middle east featured a single campaign mode which included several missions and a Massively Multiplayer Online Arena. There were two type of campaigns; the first types of campaigns featured recreations of several historic operations of the IAF such as the 1967 Six-Day War, the 1973 Yom Kippur War and the 1982 Lebanon War. The game also features the historical Operation Opera, in which the Israeli Air Force bombed and destroyed the Iraqi Osirak nuclear reactor. The second types of campaigns featured several fictional futuristic operations with Iraq, Syria and Lebanon. The combat flight simulation is a survey simulation but featuring good photo realistic graphics and decent flight models.

The game became very popular in Israel, and is used until this very day by the Israeli Air Force as a recruitment tool, showcasing in Air Force open days, recruitment centers and community events.

It was one of the first simulators to use a realistic terrain based on stereoscopic satellite terrain data of the Middle East used as the main arena of the game. The terrain becomes more pixilated and less attractive the closer you fly to the ground. In 1999 a Patch 1.1 was released for free downloading...
Read More