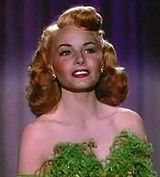 Born as Martha Jane Lafferty (she took her acting surname from Blair County, Pennsylvania) in Altoona, Pennsylvania, she began her acting career on film in 1942, being placed under contract to Columbia Pictures. During World War II, she made a string of successful pictures, although she is today best remembered for playing Rosalind Russell's sister in My Sister Eileen (1942) and Rita Hayworth's best friend in Tonight and Every Night (1945). In the late 1940s, she was dropped by Columbia and did not return to pictures for several years.

Instead, she took the lead role of Nellie Forbush in a production of the stage musical South Pacific, making more than 1,200 performances in three years. " never missed a performance", she noted proudly. During the tour, she also got married to second husband, producer-director Nick Mayo, and they became parents of Amanda and Andrew.

She appeared on television on various variety shows and was also a summer replacement for Dinah Shore. She recorded an album entitled Flame Out for the Dico label. It was a collection of ballads like "Don't Explain" and "Then You've Never Been Blue".

She made a rare dramatic appearance in the 1962 British horror film Night of the Eagle. Her last performance was on television in a 1991 episode of Murder, She Wrote, starring Angela Lansbury.

She died of complications from...
Read More