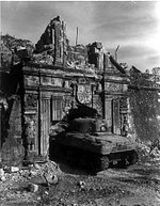 Japanese Occupation Of The Philippines

Japanese occupation of the Philippines

The invasion of the Philippines started on December 8, 1941, ten hours after the attack on Pearl Harbor. As at Pearl Harbor, the American aircraft were severely damaged in the initial Japanese attack. Lacking air cover, the American Asiatic Fleet in the Philippines withdrew to Java on December 12, 1941. General Douglas MacArthur escaped Corregidor on the night of March 11, 1942 for Australia, 4,000&nbsp;km away. The 76,000 starving and sick American and Filipino defenders on Bataan surrendered on April 9, 1942, and were forced to endure the infamous Bataan Death March on which 7-10,000 died or were murdered. The 13,000 survivors on Corregidor surrendered on May 6.

For over three years, right to the day of the surrender of Japan, the Philippines were occupied by Japan. A highly effective guerilla campaign by Philippine resistance forces controlled sixty percent of the islands, mostly jungle and mountain areas. MacArthur had supplied them by submarine, and sent reinforcements and officers. Filipinos remained loyal to the United States, partly because of the American guarantee of independence, and also because the Japanese had pressed large numbers of Filipinos into work details and even put young Filipino women into brothels.