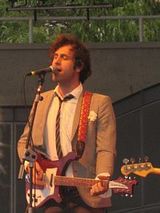 Description:
Jason Collett is a Toronto based singer-songwriter. He has released four solo albums, and is a member of Broken Social Scene. His latest album, Rat a Tat Tat, was released in March, 2010.

Collett was born in Bramalea, Ontario, a Greater Toronto Area suburb. He began writing songs at a young age to escape the boredom of his suburban life, and cites Bob Dylan, Kris Kristofferson and Nick Lowe as influences. Eventually, Collett moved to downtown Toronto where he worked as a woodworker and carpenter, doing renovations and custom home building, while he pursued his music. He was a part of the short-lived alternative country group Bird, of which Andrew Cash and Hawksley Workman were also members. Bird released one album, 2000’s Chrome Reflection. Collett also took part in Toronto’s popular indie music gathering, Radio Mondays. Collett, along with others such as The Weakerthans and artists on the record label Arts & Crafts, would perform and write songs together. Collett has mentioned how Radio Mondays were great community-building events, with five or six artists on stage at a time.

It was his work with Broken Social Scene that allowed Collett to give up woodworking and become a full-time musician. Collett became a member of Broken Social Scene, serving as one of their guitarists, after the band’s album You Forgot It In People. Collett was eventually convinced by Kevin Drew to join the band once they moved from a strictly instrumental...
Read More