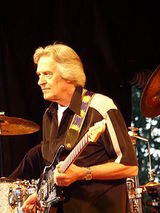 Description:
Jazz guitarists are guitar players who play jazz music on the guitar using an approach to playing chords, melodies, and improvised solo lines which is called jazz guitar playing. The guitar has fulfilled the roles of accompanist ("rhythm guitar") and soloist in small and large ensembles and also as an unaccompanied solo instrument. Until the 1930s, before guitar amplifiers were widely used, it was difficult for jazz guitarists playing acoustic instruments to be heard over drums, piano or horn sections. As a result, jazz guitarists tended to act as accompanists, strumming chords as part of the rhythm section. Once the first guitar amplifiers were developed in the 1930s, electric guitarists such as George Barnes and Charlie Christian were able to project their solo sound over a jazz ensemble.The history of jazz guitar has been an integral part of the wide-ranging history of jazz. The early guitar players were the great blues singers who accompanied themselves on the guitar. By the 1930s, guitarists gained prominence in jazz and some were even featured performers, such as Carl Kress (1907–1965), who recorded in 1927 with Bix Beiderbecke. In Europe, Django Reinhardt (1910–1953), a Belgian gypsy jazz guitarist recorded with his Quintette du Hot Club de France. Beginning in 1939, Charlie Christian played with Big Band Swing bandleader Benny Goodman, and in the bebop era, Tal Farlow was notable for his virtuoso playing.