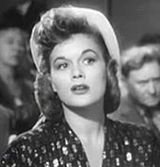 Hagen was born as Jean Shirley Verhagen in Chicago, Illinois, to Christian Verhagen (born August 10, 1890 — died April 1983), a Dutch immigrant, and his Chicago-born wife, Marie. The family moved to Elkhart, Indiana when she was 12 and she subsequently graduated from Elkhart High School. She studied drama and worked as a theater usherette before making her Broadway theatre debut in Another Part of the Forest in 1946.

Her film debut was as a femme fatale in Adam's Rib in 1949. The Asphalt Jungle (1950) provided Hagen with her first starring role beside Sterling Hayden, and excellent reviews. She appeared in the film noir Side Street (1950) playing a gangster's sincere, but none-too-bright gun moll. She is arguably best remembered for her comic performance in Singin' in the Rain as the vain and talentless silent movie star Lina Lamont; Hagen received an Academy Award nomination for Best Supporting Actress.

By 1953, she had joined the cast of the television sitcom Make Room for Daddy. As the first wife of Danny Thomas, Hagen received three Emmy Award nominations, but after three seasons she grew dissatisfied and left the series. Thomas, who also produced the show, reportedly didn't appreciate Jean's departing the successful series, and her character was killed off rather than recast. This was the first TV...
Read More