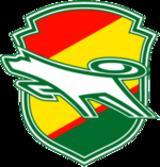 Description:
is a Japanese professional football club that plays in J. League Division 2. On February 1, 2005, the club changed its name from JEF United Ichihara to the current name after Chiba city had joined Ichihara, Chiba as its hometown in 2003. The club name, JEF -taken from JR East and Furukawa Electric- and United, represents the unity of the team and its home town. The club is also known as or .

The team began as the company team, in 1946. As the company team, it won the Japan Soccer League twice, the Emperor's Cup four times and the JSL League Cup three times. Furukawa also won the 1986/87 Asia Club Championship, the top club honor in Asia; they were the first Japanese club to do so.

Since the league's inception in 1965, the team had always played in the top flight in Japan and was the only Japanese team to never be relegated from the JSL1, a record they kept into the J1 years. They did finish the 1978 season in a relegation position (last of 10) but stayed up after beating Honda F.C. 1-0 on aggregate in a two-legged playoff. The last place was not automatically relegated until the 1980 season.

In 1991, it merged with the JR East's company team to become and rebranded itself as JEF United Ichihara upon the J. League's founding in 1993. The team initially built itself around the former Germany national football team player Pierre Littbarski.

From 1998 to 2000, the team struggled to stay in the J1 league and it began a series of efforts to be a competitive team. Since...
Read More