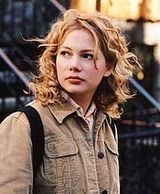 The only child of Theodore Lindley and Helen Ryan, Jen was introduced to the show in the first episode when she arrived from New York City to live with her grandmother, Evelyn "Grams" Ryan, after her parents realized just how out of control she was. She was nicknamed Duck, Jen initially provided a love interest for Dawson Leery, and the two dated throughout the first season, which caused tension between Jen and Joey Potter. Jen was the girl who grew up too fast and Joey was the girl who wondered what it would be like to do the things that Jen had done, so Joey was immediately threatened by the "City Girl". Jen and Dawson broke up when Jen's ex-boyfriend Billy came to Capeside to win her back. Billy caused immediate tension between Dawson and Jen, as Jen's past was coming back to haunt her and Dawson. Dawson in the heat of the moment basically called Jen a "slut", and she broke up with him because she had never been made to feel so cheap by anyone. By the end of the season she was regretting her decision to break up with him, and wanted Dawson back, especially as her sick grandfather died.

After the Jen and Dawson breakup, Jen became isolated from the rest of the main characters for most of the second season, especially with Joey as Jen's attempts to...
Read More