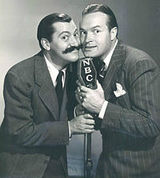 Description:
Gerardo Luigi "Jerry" Colonna (September 17, 1904 - November 21, 1986) was an Italian-American comedian, singer and songwriter, remembered best as the zaniest of Bob Hope's sidekicks on Hope's popular radio shows and films of the 1940s and 1950s.

With his pop-eyed facial expressions and walrus-sized handlebar mustache, Colonna was known for singing loudly "in a comic caterwaul," according to Raised on Radio author Gerald Nachman, and for his catch phrase, "Who's Yehudi?", uttered after many an old joke, although it usually had nothing to do with the joke. The line was believed to be named for violin virtuoso Yehudi Menuhin, and the search for Yehudi became a running gag on the Hope show.

Colonna played a range of nitwitted characters, the best-remembered of which was a moronic professor. Nachman wrote:

Colonna brought a whacked-out touch to Hope's show. In a typical exchange, Hope asks, "Professor, did you plant the bomb in the embassy like I told you?", to which Colonna replied, in that whooping five-alarm voice, "Embassy? Great Scott, I thought you said NBC!"

Colonna started his career as a trombonist in orchestras and dance bands in and around his native Boston; he can be heard with Joe Herlihy's orchestra on discs recorded for Edison Records in the late 1920s. During the 1930s, Colonna played with the CBS house orchestra, the Columbia Symphony Orchestra, and developed a reputation for prankishness. His...
Read More