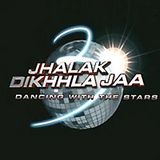 Description:
Jhalak Dikhhla Jaa is a television reality show and the Indian version of BBC's Strictly Come Dancing and ABC's Dancing with the Stars.

The show's format is taken from the Strictly Come Dancing show on BBC One in UK, which has been a huge success in over 30 countries like America, Australia, New Zealand, and Italy, where it is known as Dancing with the Stars. However, the Indian version has been extensively remodelled to appeal to the country's viewers.

The dances are typically more exuberant than on its sister programmes around the world, owing to India's unique Bollywood traditions. Also because of the strong Bollywood approach, India is the only country to not have live music with an in-house band. The show is also pre-recorded, unlike the UK's Strictly Come Dancing and other spin-offs. All the ballroom and Latin dances are performed as Bollywood-themed showdances (US: freestyles) rather than with strict 'syllabus' ballroom or Latin technique.