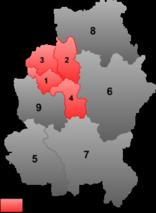 Description:
Jilin City (, Manchu: ᡤᡳᡵᡳᠨ ᡠᠯᠠ, Girin Ula) is the second largest city of Jilin province in Northeast China. As of 2010, its urban area had a of 1,975,803 and 4,414,681 people resided within its administrative area of . A prefecture-level city, it is the only major city in China that shares its name with its province.

Jilin City is also known as the River City (江城), which was originated from one sentence, "连樯接舰屯江城", of a poem written by Kangxi Emperor when he was visiting Jilin City in 1682. The alias name is also because of the Songhua River surrounding almost the whole city. In 2007, it hosted the Asian Winter Games.

Jilin City has a four-season, monsoon-influenced, humid continental climate (Köppen Dwa). Winters are long (lasting from November to March), cold, and windy, but dry, due to the influence of the Siberian anticyclone, with a January mean temperature of around ....
Read More