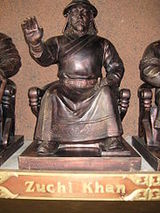 Description:
Jochi (, Züchi, ; also spelled Jöchi and Juchi) (c. 1180–1227) was the eldest of the Mongol chieftain Genghis Khan's four sons by his principal wife Börte. An accomplished military leader, he participated in his father's conquest of Central Asia, along with his brothers and uncles.

There is some question as to Jochi's true paternity. Shortly after her marriage to Genghis Khan (known as Temüjin at the time), Börte was abducted by members of the Merkit tribe. She was given to a certain Chilger Boke, who was the brother of the Merkit chief, as a spoil of war. She remained in Chilger Boke's captivity for a few months before she was recovered by Temüjin. Shortly afterwards she gave birth to Jöchi. By all accounts, Genghis Khan treated Jochi as his first son, but a doubt always remained among the Mongols whether Temüjin or Chilger Boke was the real father of Jochi. This uncertainty about his paternity was not without consequences. Jochi’s descendants, although they formed the oldest branch of the Genghis Khan’s family, were never considered for the succession in claiming their father’s heritage and there were signs of estrangement between Jochi and Genghis Khan.

In 1207 he had successfully conquered the forest peoples in Siberia, extending the northern border of the Mongol Empire for the very first time. On behalf of his father, Jochi led two campaigns against the Kyrgyz, in 1210 and 1218.Soucek, Svat A History of Inner......
Read More