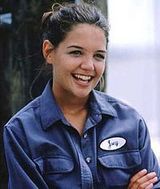 Joey has been friends with Dawson Leery since they were very young. She lives with her older sister, Bessie, Bessie's son Alexander and (sometimes) boyfriend, Bodie. Her father, Mike, is in and out of prison for drug trafficking. Her mother, Lillian, died of breast cancer when Joey was thirteen. She was given the name Josephine in honor of Jo March, the heroine from her mother's favorite book, Little Women. Joey is also the only character from the show to appear in every episode of the series.

In season one, Joey is the "girl next door". She is confused by her growth into a teenager and her developing feelings for her longtime best friend Dawson, whom she also admitted is her soulmate. She immediately becomes jealous when Jen Lindley arrives and steals Dawson away from her. She is intimidated by Jen, who grew up in New York, and doesn't know how to compete. She lives with her pregnant sister Bessie, and she works for her at the Ice House---the Potter family restaurant. She is frustrated with having to deal with work and taking care of her sister along with significant helpings of teenage angst. Nonetheless, Joey manages to be helpful with the birth of Bessie's son, Alexander, as does their critical neighbor, Evelyn Ryan. One day she is convinced to compete in the beauty pageant, which she...
Read More