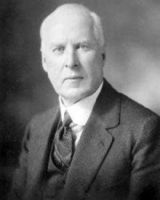 Description:
John Alexander McDougall (May 20, 1854 – December 17, 1928) was a politician in Alberta, Canada, a municipal councillor and mayor in Edmonton, and a member of the Legislative Assembly of Alberta.

John Alexander McDougall was born May 20, 1854 in Oakwood, Ontario to Alexander J. McDougall and Janet Cummings. His father died in 1867 when John was thirteen. He left school and worked to support his family.

In 1873, he moved to Fort Garry (now Winnipeg) where he worked as a fur trader and completed his education at Manitoba College. In 1877 this work brought him to Edmonton, where he decided to settle, but not before returning to Ontario in 1878 to marry his high school sweetheart, Lovisa Jane Amey, with whom he would have three sons and three daughters. The pair settled in Edmonton in 1879, where McDougall commenced trading furs in competition with the Hudson's Bay Company.

In 1881, he was one of ten Edmontonians to guarantee the five hundred dollar annual salary of the settlement's first schoolteacher. He became a justice of the peace in 1885.

McDougall traded furs until 1896, when he and partner Richard Secord founded McDougall & Secord, which advertised itself as "general merchants, wholesale and retail; buyers and exporters of raw furs; dealers in land scrip and north west lands; outfitters for survey parties, traders, trappers, miners and others for the north, and suppliers for country stores." The two ran the company until...
Read More