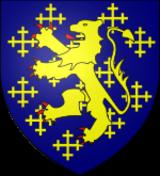 Re-establishment of the de Braose dynasty

John re-established the senior branch of the de Braose dynasty.

His grandfather had had his lands seized and his grandmother Maud de St. Valery had been captured by forces of King John of England in 1210. She was imprisoned, along with John's father William, in Corfe Castle and walled alive inside the dungeon. Both mother and son starved to death on the King's orders. This was probably due to John's grandfather's conflict with the monarch, open rebellion and subsequent alliance with Llewelyn the Great. John's nickname Tadody means "fatherless" in the Welsh.

At his family's fall from Royal favour John de Braose was initially hidden on Gower and spent some time in the care of his uncle Giles de Braose, Bishop of Hereford, but finally in 1214 John and his younger brother Philip were taken into custody. They were imprisoned until after King John had died (in 1216), the throne passing to Henry III. John was...
Read More