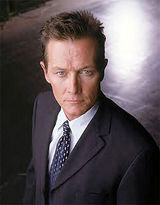 Description:
FBI Special agent John Jay Doggett is a fictional character in the American Fox television series The X-Files, a science fiction show about a government conspiracy to hide or deny the truth of alien existence. With his FBI partners Dana Scully (season 8) and Monica Reyes (season 9) they work on the X-Files office together, which is concerned with cases with particularly mysterious or possibly supernatural circumstances that were left unsolved and shelved by the FBI. Portrayed by the American actor Robert Patrick, Doggett was a main character from the eighth to ninth seasons (2000–2002), replacing David Duchovny's character Fox Mulder. Doggett appeared in the opening credits and every episode from the season eight premiere to the series finale.

Doggett made his first appearance in the 2000 episode "Within". Doggett served in the United States Military from the 1970s to the 1980s. Later he started working for the New York Police Department, he was eventually promoted to detective. After his son's death, he got a job in the FBI. He started to work for the Criminal Investigations Division. In 2000, he was assigned to the X-Files office, after the disappearance of Mulder. The introduction of Doggett was met with mostly positive reaction by critics, while getting more mixed response from longtime fans of the series.

Doggett served in the United States Marine Corps in an amphibious unit from 1977-1983. His final rank was Sergeant . While serving in the...
Read More