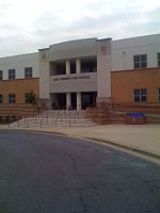 The school is a part of Montgomery County Public Schools.

Over 1,550 students are enrolled at Kennedy. Since the 2004-2005 school year Kennedy has been part of the Down County Consortium, which includes Montgomery Blair, Wheaton, Einstein, and Northwood High Schools. Kennedy's mascot is the Cavalier.

Opening its doors in 1964, The school was originally going to be called "East Wheaton High School" but due to President John F. Kennedy's unfortunate assassination in November 1963 the school took his name as its namesake.

Kennedy's early history is that of an experimental school, with open classes, no grades, and no required attendance. The onus was on Kennedy's students to be self-motivated. Kennedy's rare approach to education gained international attention, but ultimately these trends did not become very popular in other schools. Kennedy itself ceased to use this format as many parents refused to send their children to Kennedy.

After the baby boom generation, many schools were forced to close. Kennedy absorbed the student bodies of Northwood High School. Their feeder schools were absorbed by Col. E....
Read More