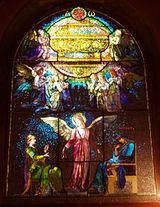 Born in New York City, New York, his interest in art began during his training at Mount St. Mary's University and St. John's College (now Fordham University). He had only the study of law in mind until he returned from his first visit to Paris, France where he studied with Thomas Couture and became acquainted with famous literary people of the city. LaFarge subsequently studied with painter William Morris Hunt in Newport.The only full-length formal portrait ever painted by LaFarge was that of Richard Howland Hunt, the young son of architect Richard Morris Hunt, brother of the painter William Morris Hunt. Even LaFarge's earliest drawings and landscapes, done in Newport, Rhode Island, after his marriage in 1861 to Margaret Mason Perry, sister-in-law of Lilla Cabot Perry, show marked originality, especially in the handling of color values, and also the influence of Japanese art, in the study of which he was a pioneer.

Between 1859 and 1870, he illustrated Tennyson's Enoch Arden and Robert Browning's Men and Women. Breadth of observation and structural conception, and a vivid imagination and sense of color are shown by his mural decorations. His first work in mural painting was done in Trinity Church, Boston, in 1873. Then followed his decorations in the Church of the......
Read More