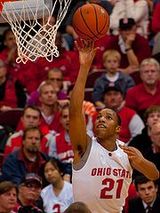 Description:
The John R. Wooden Award is an award given annually to the most outstanding men's and women's college basketball players. The program consists of the men's and women's Player of the Year awards, the Legends of Coaching award and recognizes the All–America Teams.

The awards, given by the Los Angeles Athletic Club, are named in honor of John Wooden, the 1932 national collegiate basketball player of the year from Purdue. Wooden later taught and coached men's basketball at Indiana State and UCLA. Coach Wooden, whose teams at UCLA won ten NCAA championships, was the first man to be inducted into the Naismith Memorial Basketball Hall of Fame as a player and coach. His 1948 Indiana State team was the NAIB (now NAIA) National Finalist.

The award, which was originally given only to male athletes, was first given in 1977. Starting in 2004, the award was extended to women's basketball. Additionally, the Legends of Coaching Award was presented first in 1999.

Each year, the Award's National Advisory Board, a 26-member panel, selects approximately 20 candidates for Player of the Year and All-American Team honors. The candidates must be full-time students and have a cumulative grade point average of 2.00 or higher throughout their college career. Players who are nominated must have made outstanding contributions to team play, both offensively and defensively, and be model citizens, exhibiting strength of character both on and off the court.