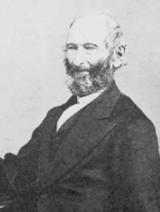 Description:
John Whitmer (August 27, 1802 – July 11, 1878) was an early leader in the Latter Day Saint movement. He was one of the Eight Witnesses of the Book of Mormon's Golden Plates. He was also the first official Church Historian and a member of the presidency of the church in Missouri.

John Whitmer was born in York, Pennsylvania to Peter Whitmer, Sr. and Mary Musselman. By the 1820s, the Whitmer family had moved to a farm in Fayette, in New York's Finger Lakes area. John Whitmer's brother, David and his entire family became early believers in Joseph Smith Jr. &mdash; the founder of the Latter Day Saint movement. Whitmer was baptized into the movement by Oliver Cowdery in June 1829, nearly a year prior to the formal organization of the Church of Jesus Christ of Latter Day Saints. In that same month, Whitmer became one of eight men who signed a testimony that they had handled and been shown the Golden Plates. Known as the "Testimony of the Eight Witnesses" the statement was printed in the first edition of the Book of Mormon and has been included in almost every subsequent edition.

The original church was formally organized on April 6, 1830, traditionally in the Whitmer home in Fayette. Whitmer was one of the earliest members and he was ordained an elder of the church on June 9. The next year, on March 8, 1831, Joseph Smith said that he received a revelation from God, calling Whitmer to "write and keep a...
Read More