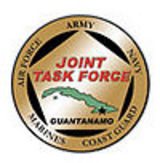 Description:
Joint Task Force Guantanamo (JTF-GTMO) is a U.S. military joint task force based at Guantanamo Bay Naval Base, Guantánamo Bay, Cuba on the southeastern end of the island. JTF-GTMO falls under US Southern Command. Since around 2002 the unit has operated the Guantanamo Bay detention camps Camp X-Ray and its successors Camp Delta, Camp V, and Camp Echo where there are detained prisoners captured in the war in Afghanistan after the September 11, 2001 attacks. The unit is currently under the command of Rear Admiral Jeffrey Harbeson, who replaced Rear Admiral Tom Copeman in June 2010. Previous commanders have included Army Major General Geoffrey D. Miller, who took command in November 2002.

The status of these detainees is disputed. The United States government defines them as enemy combatants, claiming their status was not that of a prisoner of war as recognized under the Geneva Conventions (due to not being affiliated with any government, being alleged members of Al Qaida or groups affiliated with them). On June 29, 2006, the U.S. Supreme Court ruled in Hamdan v. Rumsfeld that they had the minimal protection of Article 3 of the Geneva Conventions in that detainees must be housed and treated humanely.<!--Other parties insist that the captives be granted full prisoner of war rights and privileges listed in the Geneva Convention.-->

In 1992, Operation Sea Signal was established to prepare for a mass migration of refugees from Haiti and Cuba.JTF-GTMO,...
Read More