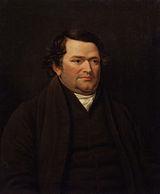 For the Florida Supreme Court Justice, see Joseph B. Lancaster

Lancaster was born the son of a shopkeeper in Southwark, south London.

In 1798, he founded a free elementary school in Borough Road, Southwark, using a variant of the monitorial system. His ideas were developed simultaneously with those of Dr. Andrew Bell in Madras whose system was referred to as the "Madras System of Education". The method of instruction and delivery is recursive. As one student learns the material he or she is rewarded for successfully passing on that information to the next pupil. This method is now commonly known as peer tutoring (also Learning by teaching) but the economics of Lancaster's or Bell's methodology is not widely discussed.

Lancaster wrote Improvements in Education in 1803 and later traveled to the United States to lecture and promote his ideas. The height of popularity of his system was in the first decades of the 19th century. In 1818 Joseph Lancaster helped to start the first model school in Philadelphia to train teachers to implement his system. 1808 saw the creation of "The Society for Promoting the Lancasterian System for the Education of the Poor".

However, despite initial successes, Lancasterian schools were criticized. The standards were poor and the discipline to which children were subjected was harsh,...
Read More