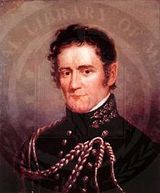 Lovell was born in Boston, Massachusetts, the son of James S. and Deborah (Gorham) Lovell. His father attained the grade of major in the Continental Army during the Revolutionary War and his grandfather, James Lovell, was an active member of the Whig organization in Boston before the Revolution, and was a member of the Continental Congress from 1777 to 1782. He was one of the prime movers in the scheme to supplant General Washington as commander-in-chief by General Horatio Gates. He was an original member of the Massachusetts Society of the Cincinnati.

Joseph Lovell obtained his early education in the Boston schools, after which he entered Harvard College, where he graduated in 1807. He began the study of medicine with Dr. William Ingalls of Boston and graduated from the Harvard Medical School in 1811, with the first class to receive the degree of M. D. With the practical certainty of a second war with Britain, Congress passed an act on January 11, 1812 (2 Stat. 671), increasing by thirteen regiments the military forces of the country, and providing a surgeon and two surgeon's mates for each regiment. On May 15, 1812, Lovell was appointed major and surgeon, 9th US Infantry Regiment. With an unusually thorough medical education, he early became an outstanding medical officer. When, late in 1812,...
Read More