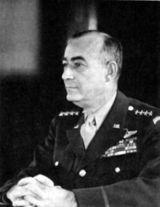 Joseph Taggart McNarney was born on August 28, 1893 at Emporium, Pennsylvania. He graduated from the United States Military Academy in June 1915 (as part of "the class the stars fell on") and was commissioned a second lieutenant of Infantry. McNarney served with the 21st Infantry at Vancouver Barracks, Washington, and with the 37th Infantry at Yuma, Arizona. In July 1916 he became a first lieutenant and began flight training at San Diego, California. One year later he was rated a junior military aviator and transferred to the Signal Corps Aviation Section. He became an instructor in meteorology and radio telegraphy and was promoted to captain in May 1917.

McNarney went to France in 1917 and became an assistant to the 1st Corps Aeronautical School. He joined Headquarters Air Service in January 1918. McNarney helped direct the 2d Corps School and led flights of the 1st Aero Squadron in the Toul sector. He was promoted to major in June 1918. During the Chateau Thierry offensive he was commanding officer of the 1st Corps Observation Group, chief of Air Service of the 3d Corps, and on the staff of the chief of Air Service of the 1st Army. He commanded the Air Corps during the St. Mihiel offensive and the 5th Corps during the Meuse-Argonne......
Read More