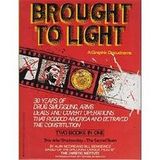 Description:
Joyce Brabner (born March 1, 1952Miller, John Jackson. , Comic Buyer's Guide, June 10, 2005. Accessed January 1, 2011. .) is a writer of political comics and a sometime collaborator with her late husband Harvey Pekar. Brabner is also a liberal social activist, most recently championing Coventry Village in Cleveland Heights, Ohio, the neighborhood in which she resides, with a series of imaginative special events begun in 2007.

Brabner recalls "read comics when I was five or six years old - including "Mad Magazine", her first exposure to political satire.

Living "in Delaware working with people in prison, with kids in trouble," running a non-profit culture-based support program for inmates in the Delaware correctional system, Brabner was a founder and manager of "The Rondo Hatton Center for the Deforming Arts," a small theater space in Wilmington, Delaware. (Hatton played horror roles — The Creeper — in the early 1940s without makeup because he was severely disfigured by a glandular disease.)

During this time, Brabner became friendly with "two......
Read More