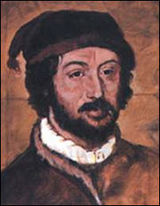 Description:
Juan de la Cosa (c.1460-1509) was a Spanish cartographer, conquistador and explorer. He made the earliest extant European world map to incorporate the territories of the Americas that were discovered in the 15th century, sailed first 3 voyages with Christopher Columbus, and was the owner/captain of the Santa María.

According to some historians he was born in 1460 at Sta. Maria del Puerto (Santoña), in Cantabria, Spain. From early childhood he spent time on the water. From the waters of his native country, which he knew thoroughly, he soon ventured on to the coast of Western Africa, which was at that time the goal of many Spanish expeditions. The first reliable references place him in Portugal in 1488, meeting the explorer Bartolomeu Dias who had just sailed around the Cape of Good Hope.

Juan de la Cosa sailed with Christopher Columbus on his first three voyages to the New World. He owned and was master of Santa María, the flagship of Columbus' first voyage in 1492. The vessel shipwrecked that year on the night of December 24-25 at the Bay of Acul on the north coast of present-day Haiti.

In 1494 de la Cosa received compensation from the Spanish monarchs for the sinking of...
Read More