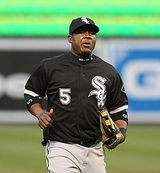 Description:
Juan C. Uribe Tena (born March 22, 1979) is a Dominican Republic professional baseball infielder for the Los Angeles Dodgers of Major League Baseball. He began his career in 1997 when he was signed to the Colorado Rockies, and played with the team until December 3, 2003 when he was traded to the Chicago White Sox. While Uribe was with the White Sox, the team won the 2005 World Series against the Houston Astros. In 2009, he was signed to a minor league contract with the Giants with whom he won another ring in the 2010 World Series.

Uribe was signed as an amateur free agent by the Colorado Rockies in 1997. He started playing in the Dominican Summer League for the DSL Rockies. In 1998 and 1999, he played in the Rookie Class Arizona Rookie League and the Single-A Asheville in the South Atlantic League. While in single-A, he batted .392 with 28 doubles and a 15 game hitting streak.

Uribe played 72 games for the Rockies in his rookie season of 2001. He batted .300, had 8 home runs, and 53 RBI. He also had 11 triples, tying a club record held by Neifi Perez and Juan Pierre. He was called back to AAA Colorado Springs three times over the season, but played most of the end of the season in the majors. He tied 3 other franchise...
Read More