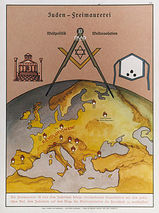 The conspiracy theory can be traced back to the aftermath of the French Revolution of 1789, which was blamed by many reactionaries on a conspiracy of Freemasons. A leading early promoter of the theory was the French priest Augustin Barruel. During the nineteenth century, the Jews became associated with the Freemasons as organisers of the conspiracy, a development that culminated in the fabrication of the Protocols of the Elders of Zion.

Following the Russian Revolution of 1917, the conspiracy became associated with the rise of Communism. Some theorists noted that Karl Marx was born into a Jewish family and that some prominent Bolsheviks were of Jewish origin. This development is illustrated by the claims of the Brazilian bishop Gerald de Proenca Sigaud:

The theory was popular on the reactionary right, particularly in France and other Catholic countries, in the nineteenth and twentieth centuries. It survives to a limited extent today.

The existence of anti-Semitism can be traced back to the middle ages, linking societies without a developed capitalist system to a broad group of ideological prejudice,...
Read More