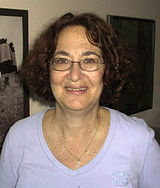 Description:
Judy Rebick (born 15 Aug 1945 in Reno, Nevada), arrived in Toronto at age 9, and is a Canadian journalist, political activist, and feminist.

In 1983, a man attacked Henry Morgentaler with garden shears outside of his Toronto abortion clinic. Judy blocked the attack, and Morgentaler remained unharmed. Augusto Dantas was charged with assault and with possession of a weapon dangerous to the public good.

Judy Rebick first gained national prominence as president of the National Action Committee on the Status of Women from 1990 to 1993. She was the co-host of a prime time debate show called Face Off on CBC Newsworld from 1994–1998 and then a women's discussion show Straight From the Hip, until 2000. She was a regular commentator on CBC TV's Sunday Report and CBC Radio. She was during that time also a columnist with Elm Street Magazine, London Free Press, and on CBC Online.

In 2001 she helped launch rabble.ca , a multi-media independent news and discussion site, with Mark Surman and Judy MacDonald, and the Canadian Centre for Policy Alternatives. Rebick was publisher of rabble.ca from 2001 until 2005.

With Jim Stanford, Svend Robinson and Libby Davies, she helped lead the New Politics Initiative, a movement that worked both inside and outside the New Democratic Party to refocus it as an activist party. The NPI's platform...
Read More