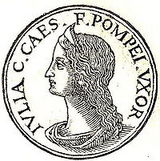 Description:
Julia Caesaris (Classical Latin: <small>IVLIA•CAESARIS</small>), 83 or 82 BC-54 BC, was the daughter of Gaius Julius Caesar the Roman dictator, by his first wife, Cornelia Cinna, and his only child in marriage.Tacitus, Annals, iii. 6. Julia became the fourth wife of Pompey the Great and was renowned for her beauty and virtue.

Julia was born around 83 BC&ndash;82 BC.William Smith (ed.), Dictionary of Greek and Roman Biography and Mythology, 1870.Matthias Gelzer, Caesar, Politician and Statesman, (translated by Peter Needham), Oxford, 1968; Thomas Robert Shannon Broughton, Magistrates of the Roman Republic, vol. 2, 132, New York, (1951–1986). Gelzer quotes Broughton to assert that Caesar was quaestor in 69.Gelzer then explains that Caesar, after taking on his place of duty, delivered an oration in praise of his aunt Julia. Shortly after this, his wife died too. she was raised by her paternal grandmother Aurelia Cotta. Her father engaged her to Quintus Servilius Caepio, who could have been Marcus Junius BrutusSempronius . In: Der Neue Pauly. Vol. 11, col. 465. (Caesar's most famous assassin) who, after being adopted by his uncle Quintus Servilius Caepio, was known as Quintus Servilius Caepio Brutus for an unknown period of time. Caesar broke off this engagement and...
Read More