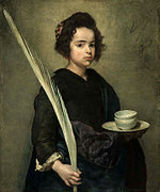 Description:
Saints Justa and Rufina (Ruffina) () are venerated as martyrs. They are said to have been martyred at Hispalis (Seville) during the 3rd century.

Only St. Justa (sometimes "Justus" in early manuscripts) is mentioned in the Martyrologium Hieronymianum (93), but in the historical martyrologies (Quentin, "Les martyrologes historiques", 176-77) Rufina is also mentioned, following the legendary Acts. The two saints are highly honored in the Mozarabic Liturgy.

La Seo Cathedral (Zaragoza) contains a chapel dedicated to Justa and Rufina. Agost, in Valencia province, is the location of a hermitage dedicated to these saints (Ermita de Santa Justa y Rufina), built in 1821. Toledo also has a church dedicated to them.

Their legend states that they were sisters and natives of Seville who made fine earthenware pottery for a living, with which they supported themselves and many of the city's poor. Traditionally, they are said to have lived in the neighborhood of Triana. Justa was born in 268 AD, Rufina in 270 AD, of a poor but pious Christian family. During a pagan festival, they refused to sell their wares for use in these celebrations. In anger, locals broke all of their dishes and pots. Justina and Rufina retaliated by smashing an image of Venus.

The city's prefect, Diogenianus, ordered them to be imprisoned. Failing to convince them to renounce their faith, he had them tortured on the rack and with iron hooks. This method also having failed, they were...
Read More