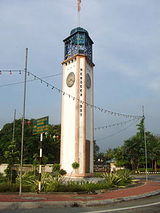 Description:
Kampar (Chinese:金宝） is a town in the state of Perak, Malaysia. Founded in 1887, the town lies within the Kinta Valley and located in the newly-created Kampar District, an area rich with tin reserves. It was a tin mining town which boomed during the height of the tin mining industry. There were many tin mines on the outskirts of Kampar during the height of the mining boom. Most of them were established in the late 19th century, flourished in the 1900s, only to stagnate and decline after World War I, with the exception of an exhilarating boom in the 1920s. Most have closed down following the collapse of the industry.

Kampar is situated in the Kinta Valley, which was well-known for its high tin ore reserves. Many KLites spend their weekends here. Its vast surroundings as well as abandoned mining-ponds are suitable for fishing.

Kampar town can be broadly divided between the 'old town' and 'new town' areas. The old town consists of two main streets of charming pre-war shophouses, the fronts of which are still mostly in its original unrenovated appearance. Commerce in the old town area mainly consists of coffee shops, goldsmiths and local retailers. The new town area mainly consists of new residential developments and some commerce servicing the burgeoning education industry in Kampar. As of 21 May 2009 the Sultan of Perak declared Kampar the state's 10th district.

Kampar had its share of war during the Japanese Occupation between 1941 and 1945. From...
Read More