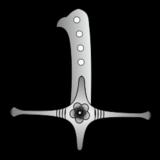 Description:
A karabela was a type of Polish sabre (szabla). Perhaps one of the most famous types of that type of weapons, it became highly popular in the Polish-Lithuanian Commonwealth in the 1670s. Most likely the name was coined after the Turkish terms Kara (dark) and belâ (curse).

The sabre was modelled after the swords of the Turkish footmen formations of Janissaries and Spahis, which used it in close quarters. Much lighter than the hussar szabla, the karabela had an open hilt with the pommel modelled after an eagle's head. Such a grip allowed for easier handling of circular cuts while fighting on foot, and for swinging cuts from horseback.

Initially, the karabela sabres were used mostly for decoration or as a ceremonial weapon worn on special occasions. Popularized during the reign of King Jan III Sobieski, the sabre became one of the most popular Polish melee weapons. Though in theory the type could be subdivided into ornamental ceremonial type and a simple battle weapon, in reality both more expensive and the cheaper designs were often used in combat. Most of the Polish nobility (szlachta) could afford only one expensive karabela and, in case of need, simply replaced the ebony or ivory-made scabbard with a leather-made one, and removed some of the precious stones from the hilt in order to convert it into a fully-reliable weapon.

In Turkish, Karabela could be understood as "Black Misfortune", from the Turkish "Kara" meaning black and the Arabic "Bela"...
Read More