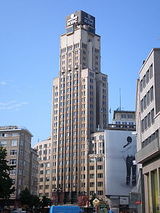 The group is controlled by a syndicate of core shareholders, but has a free float of some 42%. In the core shareholders, CERA/KBC Ancora group controls 30%, MRBB (a farmers' association) controls around 13% and a group of industrialist families controls another 11%. The free float was chiefly held by a large variety of international institutional investors (close to 45% UK-or US-based) as of the end of 2010. Its shares are...
Read More