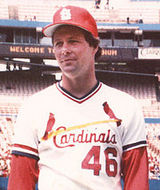 Dayley was selected in the first round, as the third pick overall, of the 1980 amateur draft, by Atlanta Braves, making his debut with the Braves on 13th May 1982. He was traded, along with Mike Jorgensen, to St Louis Cardinalson 15th June 1984 for Ken Oberkfell, where he was used as a relief pitcher, which he remained thereafter.

He was released, then re-signed by the Cardinals following the 1986 season, and would pitch for them through 1990; after the season, Dayley was granted free agency, signing with Toronto Blue Jays.

Dayley made eight relief appearances in 1991, as well as two in 1993, before being released by Toronto on 15th April of that year. Five days later, Los Angeles Dodgers claimed him off waivers, but he was released on 22nd June without ever having appeared in a game.