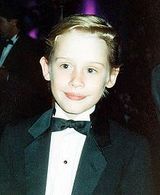 While the McCallister family prepare for their trip to Paris, Kevin finds himself the subject of ridicule from the other children. After getting into an argument with his older brother Buzz because he ate Kevin's cheese pizza on purpose, he is sent to his third floor bedroom of the house, wishing his family would disappear. The family accidentally leaves Kevin asleep in bed, as a power outage resets the alarm clocks and causes them to wake up late.

Kevin wakes up to find the house empty and is overjoyed to find that his wish came true. He gets away with taking Buzz's life savings, practicing shooting with Buzz's BB gun, jumping on the bed, watching a gangster film, and eating a large amount of junk food. However, Kevin finds himself scared by the appearance of the Chicago Police Department called by his parents to check on Kevin via payphone from Paris after Kate figures out that they left him at home by accident, his next door neighbor "Old Man" Marley, who was rumored to have murdered his family many years...
Read More