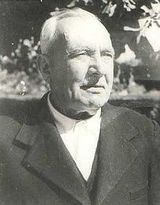 Description:
Khan Abdul Jabbar Khan () ( born 1882 - May 9, 1958) popularly known as Dr. Khan Sahib was a pioneer in the Indian Independence Movement and a Pakistan politician.

He was born in the village of Utmanzai, near Charsadda in the Khyber-Pakhtunkhwa. His father, Bahram Khan was a local landlord.

After matriculating from the Edwardes Mission High School in Peshawar, Khan Sahib studied at Grant Medical College, Bombay (present day Mumbai). He subsequently completed his training from St Thomas' Hospital in London. During the first World War he served in France and Medical Services]] and was posted in Mardan with the Guides regiment. He resigned his commission in 1921, after refusing to be posted in Waziristan, where the British Indian Army was launching operations against fellow Pakhtuns.

Contribution to the Indian independence movement

In 1935, Khan Sahib was elected along side Peer Shahenshah of Jungle Khel Kohat as representatives of Khyber-Pakhtunkhwa to the Central Legislative Assembly in New Delhi.

With the grant of limited self-government and announcement of provincial elections in 1937, Dr. Khan Sahib led his party to a comprehensive victory. The Frontier National Congress, an affiliate of the Indian National Congress emerged as the single largest party in the Provincial Assembly.

At the time of independence, he was the chief minister...
Read More