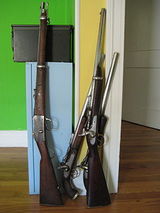 Description:
A Khyber Pass Copy is a firearm manufactured by cottage gunsmiths in the Khyber Pass region between Pakistan and Afghanistan. The reason they are called that is because the Adam Khel Afridi, who live around the Khyber pass, were historically the most active arms manufacturers on the Frontier.

The area has long had a reputation for producing unlicenced, home-made copies of firearms using whatever materials are available - more often than not, railway rails, scrap motor vehicles and other scrap metal. The quality of such rifles varies widely, ranging from as good as a factory-produced example to dangerously poor.

The most commonly encountered Khyber Pass Copies are of British military firearms, notably Martini-Henry, Martini-Enfield, and Lee-Enfield rifles, although AK-47 rifles, Webley Revolvers, Tokarev TT-33s, Colt M1911s and Browning Hi-Powers have also been encountered. A Khyber Pass Kalashnikov-style rifle usually refers to such a rifle composed of a mishmash of parts from various AK rifles. It is thus unlike any rifle produced by a factory or issued by a regular military force. The typical example of a "Khyber Pass AK" is a stamped receiver AKM in 7.62x39 caliber, fitted with the triangular folding stock common to Russian AKS-74 rifles.