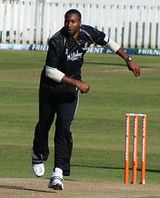 Description:
Kieron Adrian Pollard (born 12 May 1987) is an international cricketer who plays for the West Indies. An aggressive all-rounder, Pollard provides medium-fast pace bowling and big-hitting from the middle-order. After shining during the 2009 Champions League Twenty20, he was signed by both the Southern Redbacks and Somerset for their domestic Twenty20 campaigns. He was the joint highest paid player in the 2010 Indian Premier League, playing for Mumbai Indians.

Pollard was born in Tacarigua, Trinidad where he was raised, along with two younger sisters, in a poor home by his single mother. Speaking about it, Pollard reflects "It was pretty tough, it wasn't ideal getting up and your mum say 'We only have X amount of money'." After representing Trinidad and Tobago in the 2005 TCL Group West Indies Under-19 Challenge, he was selected as part of the West Indies Under-19 cricket team to tour Pakistan. Pollard top-scored for the West Indies in the first youth One Day International (ODI), scoring 53&nbsp;runs off 49&nbsp;balls. Pollard made another half-century in the second match, but didn't manage to make double figures in either of last two games. He was named in the West Indies squad for the 2006 U/19 Cricket World Cup, held in Sri Lanka, where he only managed to make 19–runs in his four innings, though he did manage to take two wickets in a defeat to...
Read More