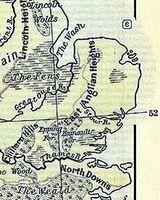 Description:
The Kingdom of East Anglia, also known as the Kingdom of the East Angles (), was a small independent Anglo-Saxon kingdom that comprised what are now the English counties of Norfolk and Suffolk. The kingdom formed after it was settled by a pagan Germanic-speaking people known as the Angles, who arrived after the end of Roman rule in Britain during the fifth century. East Anglia was bounded to the north and east by the North Sea, and to the west by the Fens, but the precise boundaries between the kingdom and its southern and western neighbours, Essex and Middle Anglia, have not been precisely defined.

Until 749 the kings of East Anglia were members of the Wuffingas dynasty, named after the semi-historical Wuffa. During the early 7th century, under Rædwald, East Anglia emerged to become a powerful Anglo-Saxon kingdom. Rædwald, the first of the East Anglian kings to be baptised as a Christian, is considered by many experts to be the person who was buried within (or commemorated by) the ship burial at Sutton Hoo, near Woodbridge. During the decades that followed his death in around 624, East Anglia became increasingly dominated by the powerful kingdom of Mercia. Several of Rædwald's successors were killed in battle, such as Sigeberht (killed circa 641). Under Sigeberht's rule and the guidance of his bishop, Felix of Burgundy, Christianity was firmly established in East Anglia.

After Æthelberht was killed by the Mercians in 794, and until 825, East Anglia ceased to be an...
Read More