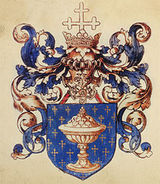 Description:
The Kingdom of Galicia (, ) was a political entity located in southwestern Europe, which at its territorial zenith occupied the entire northwest of the Iberian Peninsula. Founded by Suebic king Hermeric in the year 409, the Galician capital was established in Braga, being the first kingdom which adopted Catholicism officially and minted its own currency (year 449). After the temporal rule of the Visigothic monarchs (585-711), Galicia became a part of the newly founded Christian kingdoms of the Northwest of the peninsula, Asturias and Leon, while occasionally achieving independence under the authority of its own kings.

Compostela became capital of Galicia in the eleventh century, while the separation of Portugal (1128) determined its southern boundary. The accession of Castilian King Ferdinand III to the Leonese kingdom in 1230 brought Galicia under the control of the Crown of Castile, the kingdom of Galicia becoming an administrative division within the larger realm.

Galicia resisted central control, supporting a series of alternative claimants, including John of León, Galicia and Seville (1296), Ferdinand I of Portugal (1369) and John of Gaunt (1386), and was not brought firmly into submission until the Catholic Monarchs subjugated Galicia by force of arms in 1486. The kingdom of Galicia was then administered within the Crown of Castile (1486–1715) and later the Crown of Spain (1715–1833) by a Supreme Junta (Council) that briefly exercised full autonomy when Galicia...
Read More