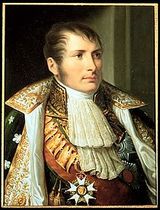 Description:
The Kingdom of Italy (, but also Regno Italico; 17 March 1805–11 April 1814) was a state founded in Northern Italy by Napoleon, fully influenced by revolutionary France, that ended with his defeat and fall.

Napoleon was crowned in Milan’s cathedral on May 26, with the Iron Crown of Lombardy.

Napoleon's title was "Emperor of the French and King of Italy" (Empéreur des Français & Roi d'Italie), showing the importance of this Italian Kingdom for him.

Even though the republican Constitution was never formally abolished, a series of Constitutional Statutes completely altered it.

The first one was proclaimed two days after the birth of the kingdom, on March 19, when the Consulta declared Napoleon as king and established that his sons would succeed him, even if the French and the Italian crowns had to be separated after the Emperor's death.

The second one, dating from March 29, and regulated the regency, the Great Officials of the kingdom, and the oaths.

The most important was the third, proclaimed on June 5, being the real constitution of the kingdom: Napoleon was the head of State, and had the full powers of government; in his absence, he was represented by the Viceroy, Eugène de Beauharnais. The Consulta, Legislative...
Read More