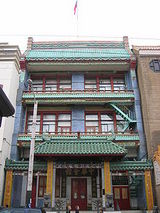 This page is about overseas Chinese organizations (often known as clans) known as kongsi. For a list of commercial enterprises in the Greater China region, see PRC companies, Hong Kong companies, or Taiwanese companies.

Kongsi () or "clan halls", are benevolent organizations of popular origin found among overseas Chinese communities for individuals with the same surname. This type of social practice arose, it is held, several centuries ago in China. The Chinese word Kongsi is used in modern Chinese to mean a commercial "company"; the modern term for such associations is 會館 (Pinyin hui guan, literally meaning "meeting hall").

The system of kongsi was utilized by Chinese throughout the diaspora to overcome economic difficulty, social ostracism, and oppression. In today's overseas Chinese communities throughout the world, this approach has been adapted to the modern environment, including political and legal factors. The kongsi is similar to modern business partnerships, but also draws on a deeper spirit of cooperation and consideration of mutual welfare.

It has been stated by some that the development and thriving of Chinese communities worldwide are the direct result of the kongsi concept. A vast number of Chinese-run firms and businesses were born as kongsi ended up as multinational conglomerates. In the Chinese spirit, derived in large part from Confucian ideals, these kongsi members or their descendants prefer not to boast so much of their...
Read More