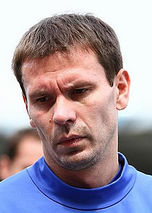 Zenit Saint Petersburg's late-developing holding midfielder was Russian Footballer of the Year in 2007, probably most notably for his scoring ability shown in August 2007 alone when he scored six league goals for Zenit.

Zyryanov can also play at the back and, in addition, has been used as a creative/goalscoring role by Zenit coach Dick Advocaat.

Zyryanov was struck by tragedy in August 2002 when his wife Olga, who was a drug addict, jumped from their eighth floor apartment holding the hand of his four-year-old daughter. His daughter died that...
Read More