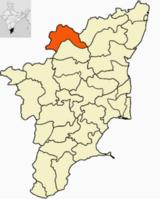 Description:
Krishnagiri () is a district in the state of Tamil Nadu, India. The city of Krishnagiri is the district headquarters. E-Governance was first introduced in Tamil Nadu at Krishnagiri district under the National e-Governance Project (NEGP) in Revenue, Social Welfare departments on a pilot basis.

It basically has a mountainous terrain....
Read More