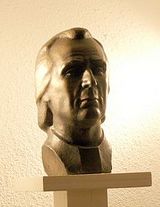 Description:
Kristijonas Donelaitis (January 1, 1714, Lasdinehlen near Gumbinnen, East Prussia – February 18, 1780 Tollmingkehmen, East Prussia; ) was a Lithuanian Lutheran pastor and poet. He lived and worked in Lithuania Minor, a territory in the Kingdom of Prussia, that had a sizable minority of ethnic Lithuanians. He wrote the first classic Lithuanian language poem, The Seasons (), which became one of the principal works of Lithuanian poetry. The poem, a classic work of Lithuanian literature, depicts everyday life of Lithuanian peasants, their struggle with serfdom, and the annual cycle of life.

Donelaitis' parents were free peasants who owned the land that they cultivated. His father died in 1720, leaving seven children (4 sons and 3 daughters). One of his three brothers, Friedrich, became a goldsmith in Königsberg. Another brother, Michael, inherited the father's farm. His third brother, Adam, became a blacksmith and innkeeper.

In 1731, Donelaitis began attending a cathedral school in Kneiphof, a section of Königsberg. After graduation, he received a scholarship in 1736 to study at the University of Königsberg. For four years he studied Lutheran theology. His world view was shaped by the classical curriculum, required Lithuanian...
Read More