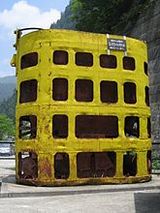 Description:
The or , is a variable-radius arch dam on the Kurobe River in Toyama Prefecture on the island of Honshū, Japan. It supports the 335 MW Kurobe No. 4 Hydropower Plant and is owned by Kansai Electric Power Company. At high, it is the tallest dam in Japan. It was constructed between 1956 and 1963 at a cost of ¥51.3 billion yen. The project was a difficult engineering feat for the rapidly growing post–World War II Japan, and claimed the lives of 171 people.

In 1951, the Kansai Electric Power Company was formed to provide electric power for the Kansai region of Japan. Shortly after their formation, the area suffered from drought which caused power rationing. The drought along with the rapid growth of post–World War II Japan pushed the company to increase their generating capacity. After a series of geological and hydrological studies of the Kurobe River and Gorge, it was announced in late 1955 that the Kurobe Dam would be constructed.

In July 1956, construction on the dam began. Kansai decided to construct the Kanden Tunnel under Mount Tate that could bring supplies from Ōmachi eastward towards the construction site. The tunnel proved an arduous task as a...
Read More